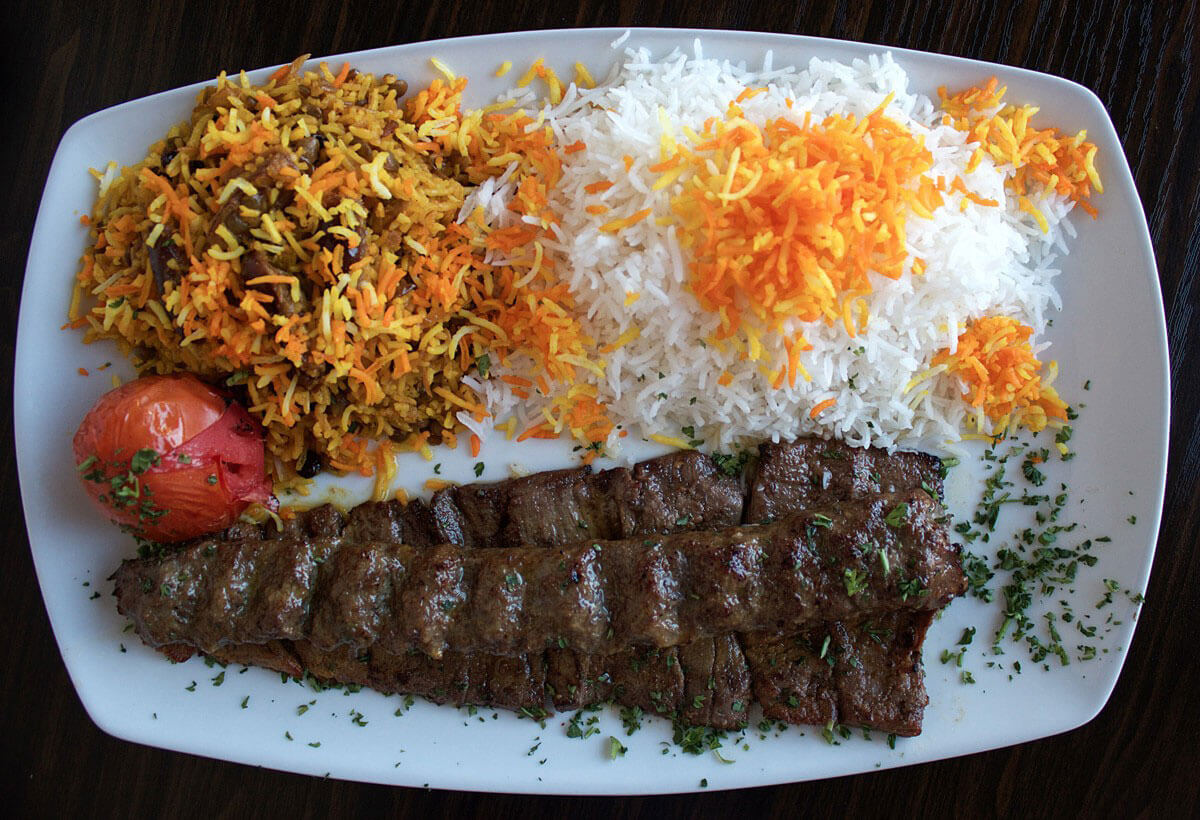 The space in which Basil Mediterranean Grill now sits used to be a vegan Japanese restaurant called Local. I liked Local and wrote about it favorably, but alas, it didn’t last. In the back of my mind, I kind of knew it wouldn’t. So it didn’t surprise me that despite the delicious bowls of vegan ramen it served, it folded after a year. The food was probably too progressive and too pricy. Or maybe it was the location: The storefront is tucked under the armpit of a building hidden beneath the shadow of the Triangle. If you were driving down Harbor toward 19th Street and weren’t looking for it, it wouldn’t even register in your peripheral vision. Then there was the atrocious parking and the sterile, barely lit dining room that made you feel you were holed up inside someone’s attic, with a rusty bicycle in the corner.

I say all this to contrast what this space has now become. Basil Mediterranean has transformed the room into everything it wasn’t as Local. The place not only got a facelift, but it also got a complete and total transplant. The dangling bare bulbs that used to illuminate almost nothing have been replaced with recessed lighting that pours bright-white light from the ceiling. And instead of the wooden plank that functioned as a bench, there are rows of booths, with flower vases on every table. It’s obvious the new owner spent a considerable amount of money to not only make the place hospitable and elegant, but also exhibit a rock-solid sense of permanence where before there was none.

The biggest difference, of course, is the food. Unlike its predecessor, Basil Mediterranean is not interested in the vegan or the avant-garde. It’s a traditional Persian restaurant that thrives on the tried-and-true. For appetizers, I found the usual olive-oil-drizzled hummus through which I dragged pita triangles. There’s also the much-more-interesting savory-sugary mash of baked eggplant called kashk e bademjan that’s topped with yogurt, dried mint and fried onions.

For mains, Basil focuses on staples of kebabs and rice, the very same kind of meal that introduced most Californians (including myself) to Persian cuisine at food courts and other eateries that might label itself as Mediterranean. For now, aside from the occasional stew scribbled on a blackboard, nearly everything on the menu comes from the grill, whether it’s beef, chicken, lamb or seafood. And with more than 15 choices in that regard, that’s already plenty.

The koobideh—seasoned ground sirloin molded onto metal skewers, then roasted over flames—tastes like the most flavorful hamburger meat ever made, not too tightly packed and practically weeping juices when pierced with a fork. It’s easily one of the best koobidehs in Orange County, but also one of the most reasonably priced. As of this writing, it costs $5 less than what Darya, across from South Coast Plaza, charges for its koobideh.

This, I found out, may be by design. Our server not only revealed that Basil’s owner was previously affiliated with Darya, but also that the beef combination plate I ordered called soltani—which contained one koobideh and one barg—is sold for almost half the price than the same dish over there.

He’s absolutely right. Yet even without the comparison, for $17, the soltani is still an incredible bargain. Imagine the koobideh, a long beefy tube that’s already a meal unto itself, paired with the barg, a seemingly endless stream of grilled filet mignon sliced to the thickness and width of a cassette tape. And as with any steak that might cost three times as much, the barg is so soft I barely had to chew. Beneath all this is an avalanche of fragrant basmati rice no mortal should be able finish by himself. But somehow, I did, thanks to the whole roasted tomato that’s meant to be smashed with a fork so that its juices moisten the grains.

Chicken, which also gets the same charbroiled treatment as all the other meats, can be had in at least four ways. There’s a bone-in Cornish game hen for those who relish eating with their hands and roasted boneless chicken thighs for those who prefer dark meat. But if there’s a dish that should please anyone no matter his or her poultry predilection, it’s the chicken shish kebab—char-kissed pieces so bright orange from its marinade it almost resembles tandoori. And for an all-breast skewer that alternates between onions and bell peppers, it sets a new standard on tenderness and juiciness for white meat, just as Basil has now set the standard for elegant Persian restaurants that don’t overcharge.